My soul dies with you. 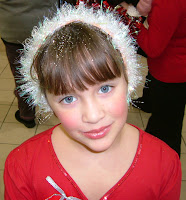 Unofficially, she died in my arms at 8:55 pm at North Rec skating rink in Elyria.

Her heart just stopped beating; as much as this hurts, we probably won't ever know why.

She knew no pain, and no fear. She was gone before she hit the ice last night.

Kiersten was 9 years old. She was the best, brightest thing in my life and bringing her into this world was best thing I have ever done. I will never, ever stop missing her.

There have been times in the last 24 hours when I have wanted to join her in body, because she already has my soul with her.

We were able to donate her heart valves for transplant, so maybe someone else won't have to go through this heartache.

I need until Monday to set this up, but rather than sending flowers, please support one of the two things that Kes really cared about.

Love a stray is a no-kill shelter for cats in Avon Ohio. They place cats at PetSmart for adoption and every time Kiersten went into PetSmart, she stopped to visit the kitties. They made her smile.

The Cleveland Metroparks Zoo has an adopt an animal program. Kiersten's favorite animal was the gharial. Only my Bug would love a gharial. But you can make an adopt-an-animal pledge in Kiersten's memory. They'll pool the donations and put her name on the parent's list every year.

Thank you for all the wishes and prayers. They mean a lot today. They'll mean more after all the people leave and my house is quiet.

Beth, you are a wonderful mom, wife, daughter, and just all around favorite of mine. Stay strong and much luv is sent your way. We got the Zoo thing covered for you...Peter and Chloe are sending kitty hugs:)

Dear Beth, your soul doesn't die. It breaks into a million pieces, and most come back together. And those parts of your soul that you lose, are always with Kiersten.

Beth, bhd is right. Your soul doesn't die. Yes, it has broken into a million pieces, but it will come back together eventually.

You have no idea what your loss means to a community of fellow souls. We are heartbroken as well; we ache for you and with you.

Please know that Kiersten will remain in our hearts and minds. I knew her through your stories about her, and I won't ever forget her spark.

She was beautiful, Beth. I'm so sorry never to have the chance to meet her.

BHD is right, of course. It's a grievous loss ... incomprehensible, but Kes will, in some way, help you find joy again.

she will always be with you, now as your bright angel.

love and blessings to you and your family as you grieve.

You have woven a beautiful fabric of family and friendship. I pray that it supports and swaddles you every moment of every day. You are loved.

Much love to you.

I'd already sent something prior to reading this which should arrive Wednesday... but will also contribute to the Zoo in Kiersten's memory and in her honor.

When reading the article in your local paper of her passing, and then this - in addition to deep sadness, empathy and love for you - I was touched by the profound effect that Kiersten had on so many lives in such a short time. In 9 years, she had a positive and lasting effect on more people than many will have through their adult lifetime.

I never had the pleasure of meeting Bug - except for through the sparkle in your eyes, the light in your voice, the warmth in your arms, and the love radiating from your heart whenever you spoke or wrote of her. Such complete affection and sincere love...

She was blessed to have you as a mother as much as you were blessed to have such a wonderful, loving, and special daughter. As time passes, your soul will "re-form" while you grieve, and you'll always feel Bug's presence and being with you throughout your life - at times bringing tears anew from the loss, but at other times bringing a smile accompanying the memory and moment, and warmth from the knowledge that she truly lived and loved.

Thank you for bringing Kiersten into this world and caring so much and so completely for her. The world is clearly better for her presence and light, now dimmed by her too early exit, but ever living on through all the hearts and lives she touched, and through you, always.

If I can do anything for you, if just talk, please let me know.

I'll be holding you in my heart and thoughts...much much love to you...
tommy

We are all thinking of you here in Wyoming...

Beth - I am so sorry for your loss. There is no explanation or reason that makes sense.

Have some comfort knowing that she never knew the world as it really is; she never had her trusting heart broken by a callous person; she was never talked behind her back; she never had a false friend...she was a pure as the day she came into this world and she only knew love and trust.

Take comfort knowing her last days were such a wonderful Thanksgiving with you. Time off from school! Playing! And so soon after Halloween! How does it get better for a child? And know that her last moments were entirely filled with such happiness from being taken ice skating with you. What a beautiful gift for any child, special time with a parent!

She is at rest now, knowing true love and happiness with you. She was a gift, and she knew she was treasured.

Beth, I'm so so sorry to hear of Kiersten's death.
Although I didn't meet her, I know she was all the best parts of her Mom and Dad because you were so lit up whenever you mentioned her. If I can do anything at all for you please please just ask..you are close in my heart right now, and I will continue sending prayers to you.

Oh, My heart aches for you and your family..

Oh Beth - There are no words. I am so sorry.