So I’m off the soap box for a few days, because I’m just too freakin tired to think.

We cleaned out our garage on Saturday. Now, this may be a trivial activity in the eyes of many, but you have you understand two things:

1) My husband is a pack rat extra-ordinaire
2) Said husband hates to clean.

The end result of these two things is that our garage had about 4 years of crap in it. His M.O. is to take whatever is in his car, put it in a cardboard box, and shove it in the garage. If it doesn't fit in a box, just shove it in there anyway. Do this once or twice a month for 4 years. You get the picture.

It was frightening beyond one’s wildest nightmares.

But we cleaned it out. Took 9 hours. Two bon fires in the back yard. Many sore muscles. And we have a pile of crap to be thrown out in the driveway now that is the size of my car.

Now here’s the kicker: My car still won’t fit in the garage, near as I can tell. I’m not sure how that happened.

Anyway, at least I can open it without being embarrassed that the neighbors will see. And I have a sense of accomplishment that is close to that which I feel after I spend 8 or 9 hours on my garden.

Sunday was a better day.

We went to see The Lion King onstage. 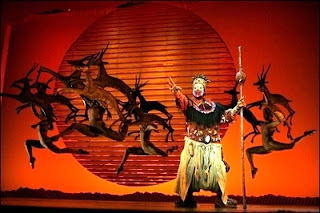 If you haven’t seen this, stop right now, call your local Ticketmaster, find out when it’s coming to town and book yourself tickets.

This was, bar none, the best touring show I’ve ever seen. Ever. And it comes damn close to the best stage production I’ve ever seen ANYwhere. And you have to realize I’ve seen Cats at the Wintergarden and Les Mis in London.

It was that good. The costumes! The staging! The wonderful casting of an enormous South African woman as Rafiki. The performance of the Elton John/Tim Rice music (as well as an African-themed score by Lebo M, Mark Mancina, Jay Rifkin and Hans Zimmer) by a live orchestra. Birds flying over the audience! Incredibly gorgeous men dancing in loin clothes. People who are dressed as GRASS, and who seem essential to the production. Depth of character that you just can’t get in a cartoon. Honestly, I was in tears more than once from sheer awe.

Them that's got shall get, them that's not shall lose


I work at one of the largest, wealthiest research hospitals in the United States. As I drive on campus each morning, I can see beautifully-manicured lawns, expensive cars, massive construction on building projects worth hundreds of millions of dollars. I see banners proclaiming US News rankings and advertising the new 4-star restaurant they’ve opened in the hotel across the street from my office. Everything about it speaks of success and money.

What I see in the ten minutes before I reach campus is a different story. The campus is situated in one of the poorest neighborhoods in the city. Each morning, I see prostitutes in skin tight shorts and wobbly heels, wending their exhausted – or stoned - way home from a night of work in some other part of the city. I see drug deals made with a pat on the back and a hand slipped into a coat pocket. I see teenaged girls dragging weary toddlers to the convenience store – there are no true groceries in these parts of town. I see gangs of young boys in white t-shirts and baggy pants, who should be in school but aren’t. I see street people sleeping off the aftermath of last night’s struggle with personal demons. I see middle-aged men, sitting in doorways, staring at nothing, hoping for nothing. They'll still be there on my way home in the evening.

I also see churches, perhaps a dozen or more in the 20 blocks between the freeway and my parking lot. They proclaim messages from their front signs:

All are welcome here
Tithe if you love Jesus; anyone can honk
CH__CH. What’s missing?
Tent revival August 24-28. Seek your salvation here.

They also proclaim the following:

The last sign hangs on the church parking lot across the street from my parking lot. Each Wednesday morning, a truck pulls up from the local food bank and distributes meager bags of groceries to the local residents. The crowd forms early and throngs well into the lunch hour. Even if I couldn’t see the crowd, I would know they were there by the singing. As they patiently wait in line for stale Thomas’ English muffins, surplus granola bars, fruit roll-ups and brown-paper bags of rice, they sing hymns of thanks. Young, old, mothers with babes in arms, homeless men in outfits that are uniformly grey-brown from months of street dust, the strung-out, the insane. They sing thanks and praise under the leadership of the church pastor, as thousands of well-dressed employees hurry from their cars to their offices a mere 90 feet away.

On one side of the street, the haves; on the other, the have nots.

I find myself wondering how our country – how any country – can hope to achieve peace and democracy abroad when it so clearly has not put forth the effort to give its own people equity in society.

How do we set our own house to rights?

Stay tuned, all three of you who read this blog. I have some ideas. And I’d like to hear yours.
Posted by Beanie at 11:30 AM 5 comments: Links to this post