Yeah, so I can't wait to get my garden in. In the last two weeks, my tomatoes have gotten tomato-like 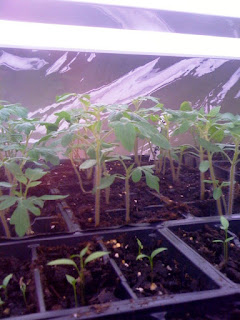 The cucumbers are positively bursting at the seams to get outside 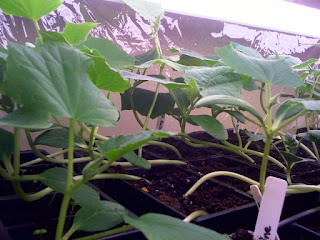 And the peppers are...well, the peppers have sprouted. You can't put them outside until the soil warms up anyway... 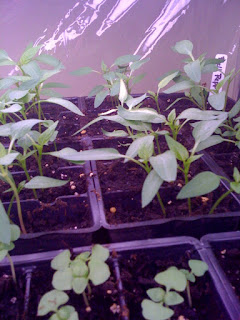 Mr. Bean, a/k/a "King of the Roto-Tiller" has prepared the garden bed 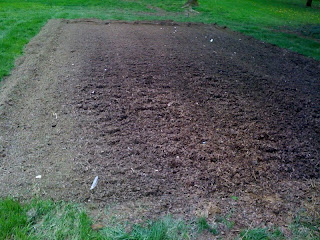 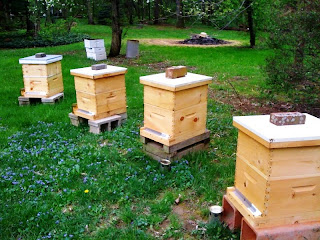 Can't wait to play in the dirt. I think the lettuce and spinach, and the bean seeds, will go in this weekend. :)
Posted by Beanie at 9:56 PM 4 comments: Links to this post

She sat across from me on the bus. We, the only two there so far, had taken seats across from each other while we waited for the others.

She'd spent the last two hours questioning me -- short, awkward questions that hinted at a desire for intimacy where before we had always had distance. I walked the line carefully -- trust is dangerous, even among women.

Thus far, I had been able to demure, focusing instead on the thousand tasks that needed to be completed. Now, however, it was just the two of us, trapped here by the expectation of our soon-arriving colleagues, and she saw her opportunity.

"So if you were to ask God a question, what would it be?"

Every cell in my body commanded me to pause, to think. I didn't.

"What job did you have for her to do that was so much more important than being my daughter?" I fought not to let the emotion choke my voice.

She leaned forward and removed her glasses. Her green eyes were striking against the auburn she had chosen for her hair. She chuckled.

"You are too young to be my sister; too old to be my daughter. So how to answer you...

"Perhaps it's not about what her job is. Perhaps God is interested in what you have to do that is so much more important than looking after a soul he has already taken into himself."

I met her gaze and formed another question on my lips.

And then the others arrived.
Posted by Beanie at 10:15 PM 9 comments: Links to this post

We finally did it.

We got Daisy Mae a cell phone.

In contrast to my normal M.O., I did not hold out for her to have accomplished something momentous before she got the phone. She didn't bring home straight A's or get named "student of the week" or anything like that.

In the end, we were done in by a couple of very simple conditions:

1) She's starting to make more friends and spend more time away from home, and we came to realize that it was in the best interest of our sanity and her safety for her to have a phone.

I think, in some ways, #2 was a bigger determinant than #1. Don't get me wrong; we both recognized that it was unfair and kind of a pain in the butt to have to rely on her friends and her sister to reach her when she was away from home. But in some ways, I was more swayed by the fact that, when she broached the subject in the fall, I told her that I needed to see more evidence that she was responsible enough to have a phone. She pushed back, but only for a little while, and then she let it go.

No whining. No complaining. No dramatic tirades about how we were the most unfair and backwards parents in history. No re-opening of the discussion on a weekly basis. She just stepped away from it and lived with the house rules.

Kiersten was very similar in that respect. They both would internalize rules, including their consequences for having broken house rules, without too much fuss. If you know you're going to be grounded for breaking this rule and you break it anyway, well...you live with those consequences. If mom says no; then the answer is no. Screaming about it isn't going to change anything.

It's something I respected a lot in Kiersten, and it's something I respect a lot in Daisy Mae. That was why, when S and I started discussing this last week, I realized that Daisy would follow the rules regarding the phone. If she knows that she only has X number of text messages, or that she loses the phone for using it during school, she's very likely to live by that. (It doesn't hurt that AT & T lets you set your kids up to succeed by giving you tools to shut down talk and texting during bedtime and school hours.)

So we're giving it a try. She knows that I can get a transcript of her text messages at any time, and she knows that I have a full accounting of every call and text she makes or receives. And the device has a GPS in it, so I can use it to pinpoint her location to within 30 feet at any time. She's happy to have these controls, if it means that she and her friend Abigail can text each other 15 times a minute. ;) But more importantly, I think it signals to her that there is permanence here. That she's part of the tribe. When you grew up in a household where, sometimes, no one noticed or cared if you ate or not, there's a comfort in knowing that somebody wants to know your whereabouts to within 30 feet, that somebody will be there to answer the phone when you call, and somebody will come out in the rain to pick you up at the ice cream shop.

Daisy has been pretty much on Cloud Nine ever since we picked up her phone on Friday. I hope it lasts. I love her smile. And I like sending her goofy text messages from the next room.

Oh, whatever!
Posted by Beanie at 7:46 PM 3 comments: Links to this post

And tomatoes. And spinach, and lettuce and green peppers and herbs.

This year, for Christmas, Mr. Bean got me a greenhouse cart. Three levels. With humidity trays, adjustable lights, and a cover to keep all that earthy goodness perfectly moist and away from munching kitties.

He knows how much I have struggled with getting my garden plants started from seeds the last few years. We have no south-facing windows, and so invariably, my seed-started peppers and tomatoes end up leggy and small, and I eventually give up and go to the garden center for flats.

Last Sunday, because Easter was so out of kilter for all of us anyway, I came home from church and got busy starting my seeds out on the back porch in the 70-degree sunshine. As it turned out, several friends stopped by (Thank God for our friends. Seriously. I think we all would have ended up...well, I don't even want to think about where we would have spent the last five months without them) toward the end of the seeding time and all stood around, drinking champagne and making all the appropriate Oooo and Ahhhhh noises over the greenhouse cart.

But here I am, a week later, and I have lovely sprouted veggies. Not spindly, sickly, hung-over looking things, but hearty, thick stemmed beauties, resplendent with secondary cotyledons. Well, I was so tickled I started another two flats of flowering herbs today.

We can get lost in ourselves sometimes. We go to work, we struggle through our relationships, we search for meaning in our everyday activities. But sometimes, we can marvel at the simple miracle of plant growing from seed, the smell of wet earth, the bringing forth of beauty and sustenance from what seems to be nothing, and we can remember that the world is a remarkable place.

I'm going to go thank S. again for my Christmas present. He always knows what I need, even when I don't.

I'll update you after the garden gets roto-tilled in (amazing that I got a greenhouse and he just happened to get a roto-tiller for his tractor), and we start getting down to serious business for this year. Our neighborhood is especially hungry this year, and I'm looking forward to having our garden help sustain us all in more ways than one.

In the meantime, feast your eyes on these lovelies: 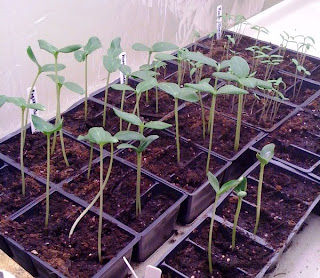 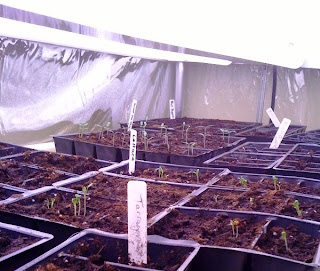 Things I did today:

Went to a memorial for the sister of a far-away friend who couldn't be there himself.

Spent time with the beautiful and talented ClevelandK8.

Cried a little. Together.

Talked to my Dad, who is in the hospital while his new bone marrow takes hold and gives him a new lease on life.

Basked in the April sunshine.

Missed my beautiful baby girl a ton and a half

Felt thankful for the beautiful girl I still have here.
Posted by Beanie at 12:06 AM 1 comment: Links to this post