Stuff that just p*sses me off!

So I don't talk about this a lot here, but my dear hubby and I both are involved in a lot of volunteer child advocacy activities here in town. I work primarily on the education side; he works primarily on the support services side. So we both get a lot of satisfaction out of helping kids get off to a better start in the world, but we also both see a lot of stuff we wish we didn't know existed.

So I guess we're both a teensy bit smarter than the average bear when it comes to dealing with issues of family relations, custody, etc. I guess it's for this reason that "Julie" turned to us for help.

Julie is the mother of one of my daughter's little friends from school. Little friend (I'll call her Audrey) is a delight: clever, compassionate...perhaps a bit rough around the edges, but she comes by that honestly. Julie, you see, is a recovering addict with a felony record. Or at least I thought so until last night. Recovering, that is.

Julie and the kids were living with Julie's mom until Julie decided to get an apartment a few months back. Apparently Julie's mom didn't like this turn of events, (it seems Gramma is a control freak) and decided to sue Julie through local social services for custody of the kids. She claimed Julie was using again and neglecting the kids. Julie has sworn that she was clean and just trying hard to take good care of her babies. And she appeared to be sincere -- the kids were relatively clean and well-fed and she seemed to be giving them ample time. I've had a few suspicions -- addicts are notorious liars. But she spent a lot of time with me on the back porch while the kids played, and shared a lot that she didn't have to share. I really felt for her and sort of took her under wing. I really believe that every family should be given every opportunity to stay together if they can. Besides, I'm not convinced Gramma isn't a bit psycho.

Anyway, Julie has turned to S and me for some support through all this -- asking for advice about how to deal with the county people and whatnot. Our advice has been consistent: do what they ask you to do. Take your drug tests. Accept any and all assistance. Tell the truth. We even offered to have the kids live with us temporarily (we're state screened foster parents) so everyone involved can catch their breath and get their acts together. Julie was terrified about it all -- she's not used to any happy endings with local authorities, from the sounds of things, and trying to convince her to trust in these people was a struggle. I was really afraid she'd do something stupid, like bolt.

About three weeks ago, we found out from Audrey (through my daughter as part of a recess discussion) that she and Julie and little brother were reuniting with "Jim", the kids' dad...out of state. I was optimistic about the reunion; not so much about part 2. The county people are not too understanding about the whole "flee across state lines" thing. Still, two parents are better than one and so long as they're not both completely dysfunctional (and I know Dad is a citizen, of sorts) I was cautiously hopeful that this might have a happy ending. Julie, of course, was immediately impossible to contact, so I didn't have a good way of knowing if they did any of this "by the book" or not.

I've frankly been worried sick about these kids for the last three weeks. I would take Audrey as my own in a minute and I ache to see her in a bad situation.

Fast forward to last night, when I get a collect call from a county jail in another state.

Apparently, there was some domestic dispute that took place and Julie was in jail. She'd been in the pokey for some time, evidently. She wanted me to try to reach Jim with information about how to get her released, as the custody hearing with Gramma is soon. It was complicated and the story full of holes. Still, I promised to talk with Jim. I welcomed an opportunity to get more of this story and like I said, I've been worried sick about these kids.

Hubby (God I love that man!) made the phone call, and talked with Jim for some time. Long story short: Julie had been using the whole time she was up here. Jim made her clean up as a condition of them all getting together, and after a week she went into some DT-induced freak-out and tried to kill him. Literally. But the kids are fine; they haven't so much as inquired about Julie's whereabouts. They're in school and he's getting them counseling. Jim's parents are nearby and helping out with support and stability. It's not exactly Leave It To Beaver 2007, but they sound OK.

But he's leaving Julie in jail and I'm supportive of that. She'll get treatment there and hopefully they can get her sufficiently cleaned up that the family has fighting chance. It's tough love, but it's what she needs. I just hope and pray that those kids get to stay with Dad. He seems the only sane one of the bunch. If I get called to testify (and it seems I might...how do I get myself into these situations???), I will tell the authorities as much.

But I'm pissed. Julie lied to me and she put those kids in jeopardy. And I was prepared to help her battle for custody of them. I feel betrayed and angry with her -- and with myself too, for believing her.

Chalk it up to another learning experience. Maybe the bear is smarter than me after all.
Posted by Beanie at 1:11 PM 3 comments: Links to this post

Labels: Stuff That Pisses Me Off

No Joy In Mudville

Oh, they broke my heart again. Do I blame Bettancourt? Skinner? That stoopid day off on Wednesday?

Nah. It's Baseball. With the two genuine best teams in the league battling it out in seven. Someone had to lose.

Well, thanks for a fun ride, boys. Let's do it again next year, OK?
Posted by Beanie at 10:24 AM 2 comments: Links to this post

Labels: Stuff I love about Cleveland

A more upbeat thought for today

So the grant from hell has been re-sent to the people who care about such things, I've mailed off my thank you notes to those who were helpful, I have begged forgiveness from those who have felt wronged, and I delegated off two mini-projects that have been hanging over my head for the last four weeks.

So many things to say and so many updates to give y'all, but right now it is 5:15. I'm going home from work while the sun is still out, and tonight I'm going to eat Thai food, maybe drink a beer and hopefully watch Cleveland win the pennant. GO TRIBE!!!

Posted by Beanie at 5:08 PM 2 comments: Links to this post

Labels: Stuff I love about Cleveland

The Song that Never Ends

This is the song that never ends.
It just goes on and on my friends.
Someone started singing it not knowing what it was,
and now they'll keep on singing it forever just because,

This is the song that never ends.
It just goes on and on my friends.
Someone started singing it not knowing what it was,
and now they'll keep on singing it forever just because, 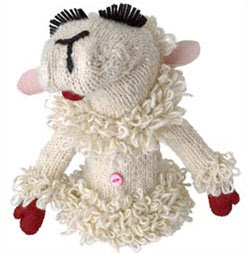 Now, let's contrast that with Sigourney Weaver, in her underpants, getting ready to take a nice chilly nap on her ride back to Earth, just as that alien pops up out of nowhere and scares the pee out of us. 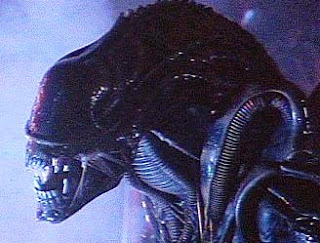 Which one is my day, we wonder?

So late Thursday, we reached what I thought was the end of Phase I of Beanie's Death March Project, a six month romp through the bowels of modern medicine and organizational management. The end result of this little exercise in stress was a 497-page document that basically asks for money. Late Thursday, the "powers that be" pushed the magic button to send our solicitation to DC in hopes of being able to change the world at some future date.

Fast forward to last night, when the phone rang during dinner and my boss popped out of it, like that pesky alien.

"Did you read Section 4.1?"
"No, I was busy with sections 4.2, 4.3, 4.4, the commercialization plan, the management plan and the introduction. I figured 4.1 and 4.5 were the domain of scary dragons and I ventured not into them."
"4.1 sucks. It's riddled with clinical innacuracies."
"Did you call the guy who wrote 4.1?"
"Of course not; he clearly has no clue. Do you think we can pull the submission back and fix it?"
"I don't know -- never tried it. And besides, I'm not the person in control of the magic button. You have to ask the people who control the magic button."
"I don't like the way you've labeled figure 9 in 4.3."
"I thought you were talking about 4.1?"
"I don't like 4.3 either."
pause
"Sir, I'm tempted to hang up now, before I turn into a pillar of salt.

So today, the magic button people have pulled the submission back from DC, and I'm looking at another sleepless night fixing the mistakes of people who should have known better, at the behest of the guy who was begged to review this stuff LAST WEEK, but was too busy farking around with flow diagrams and other things that really didn't need his expert attention.

And I thought Halloween was still two weeks off.
Posted by Beanie at 10:50 AM 6 comments: Links to this post

Some days, there just isn't enough coffee in the WORLD to make up for the lack of sleep...


Gentle readers, I will rejoin you as soon as this death march is over. Suffice it to say that coordinating a grant among 14 institutions, writing a clinical trial protocol, and moving a wheelchair-bound parent into my house, all in one weekend, might have been a little too much to take on.
Posted by Beanie at 9:06 AM 2 comments: Links to this post