If you could change one thing about yourself...

As an American female, I was brought up in a culture of self-loathing. Like all American women, I can, with no prompting whatsoever, recite a litany of my physical flaws: I have thunder thighs. My nose is too big. I wish my arms were tighter. I was dismayed to learn that acne did not completely go away when you turn 40. My hair is too fine, and too wavy. My ass is unmanageable.

But if you ask me what one thing I would change about myself? It's this: My sinuses.

My mother is Mohawk and Irish; my father Bavarian German. This combination of genes has rendered my face almost completely flat in front. Picture an Asian with a European nose. It's not an unattractive combination -- I was lucky enough to have gained wide-set eyes out of it -- but anatomically, it means that there isn't enough room for everything to move around properly in there, and it makes me a walking, talking breeding ground for upper respiratory viruses and bacteria.

Where others get colds, my pretty little head makes the rhinovirus right at home, supplies chips, a big-screen TV and a phone line where it can call all of its little friends and neighbors to watch the big game. Invariably, my sinuses want to get my lungs involved, and in no time, I sound like Bela Lugosi. Or a trained seal. It depends. I have had more than my fair share of bronchitis, pneumonia, and mononucleosis over the years.

This also makes me snore. Like, scare-the-cat-off-the-bed snore. Like any red-blooded American woman, I denied this with vigor for the first several years. Ladies, I explained to Mr. B, do not snore. You are simply a light sleeper. Then I tried to convince myself and Mr. B. that I just needed to lose weight. 28 pounds later, it still sounded like Mount Vesuvius was erupting in the master bedroom every night. I finally threw in the towel and got a mouth guard -- one of those torture devices that holds my lower jaw forward, making me look like a bulldog with a bird in its mouth. I no longer snore. But neither can I eat anything that requires the use of my molars for the first two hours after I wake up each day.

So why am I writing about this today? Because I have picked up the first cold of the season. Too much airline travel; too little sleep over the last few weeks. And it's making me want to cut my own head off.

So I'll keep the thunder thighs. We've reached an understanding.

But you can take my sinuses.

Please.
Posted by Beanie at 10:46 AM 3 comments: Links to this post

Today is your 10th birthday.

I would have, in an earlier and more innocent phase of my life, said, "Today, you are 10 years old". But we both know you will never be 10 years old. You are now ageless and eternal. When I encounter you now, I encounter a spirit, mature and wise, who walks by my side. The years of me teaching you are over; the years of you teaching me have only just started. I know that I will often appreciate your companionship in the years to come. Today, however, I am just a grieving mother who misses the innocence and beauty of her child.

10 years ago today, you entered this world, though you had entered my life in a very personal way several months earlier. I had talked to you, caressed you, sang you songs, and dreamed about the remarkable person I knew you would be. You started out very much as you ended; surrounded by a team of doctors, desperately trying to get your little heart to beat and your little lungs to bellow after a terrible labor and a c-section. We were worried for a few minutes, until you decided that you were going to stick around. The moment you committed to being here, you started moving, little legs and arms kicking and flailing so much that they were afraid you would crawl off the table. You never stopped moving after that.

You were in such a hurry to live – crawling at five months, walking at eight months. You talked in full sentences before you were two. You were expelled from three schools before your fifth birthday, because you just couldn’t handle a system that wouldn’t keep up with you. Heck, it was all your dad and I could do to keep up with you!! Always bigger, always faster, always stronger, always wanting to sprint ahead of your classmates. You were even in a hurry to become a woman, which in the end was what caused you to leave us so young.

And yet, you never tired of being my baby, and for that, I will always be grateful. I’m glad you never went to bed without your dad or me by your side, talking and holding your hand. It guaranteed that we never missed a chance to say “Goodnight, Little Love.” I’m grateful for all times that, despite the fact that the other kids made fun of you for it, you held my hand when we went out and you always kissed your dad and me goodbye. I’m grateful that you still wanted me to sing you songs in the bathtub every night, and I’m sad that I didn’t always accommodate you. I’m grateful that, when we all sat on the couch, you always touched either your dad or me – even if it was just with your foot. We were always connected.

I don’t know how I’m going to honor your birthday today. My heart is still too broken to do or say anything out loud. I’m still too sad that I’m not frosting cupcakes and filling goodie bags for your friends today. Your dad and I will stay as busy as we can, taking care of jobs around the house, so we don’t have time to miss you so acutely. Maybe in years to come, you can let me know how you want to celebrate the day you came to live with us.

Happy Birthday, Bug. I hope they have a party for you in Heaven.

Posted by Beanie at 8:16 AM 6 comments: Links to this post

OK, So I know that I promised -- or at least eluded -- that I would write about the Combine Derby week before last. I'm struggling with how to explain an event that goes like this: 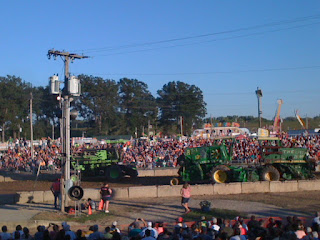 Especially when I managed to get seats that placed me in a spot where all the best action happened behind the support pole.

The combine derby consists of heats of 5-6 mostly beat-up large farm implements, many of whom have been painted to resemble cows, chickens, dogs, and in one case this year, an incredibly large flying pig. And yes, I said "whom". Alison, that was not just to make that nerve behind your left shoulder start to twitch, although I know it had that effect.

These combines take on a certain personality that extends beyond their operators, their paint jobs, and their inevitable gleaner attachments. Some move slowly and with tremendous constitution, grinding their way across the track and through their opponents; others are lithe, nimbly side-stepping the worst of the hits. The crowd roots for the largest, or the smallest, or the one that looks like it really shouldn't be running at all.

This, my friends, is Americana. It carries with it a charm missing from NASCAR, Monster, Trucks, and anything having to do with American Idol. This is about corn dogs, harvest time, and bragging rights. It's about lending your opponent your TIG welder, because it's his first time here. It's about baseball caps, slaps on the back, Hammond organs, and singing the national anthem. Out loud.

What does this have to do with birds? Nothing.

So...birds. Yeah, I have one. A Cockatiel. His name is Kevin. And if my sister is reading, the name is from the movie "Up", not about making a namesake for your husband. Kevin showed up here without warning one afternoon. We put an ad in the paper; no one claimed him.

The bird is in love with me. As in, he wants to get to "know" me. If I walk into the room, he wolf whistles. If I take him out of the cage, he sits on my shoulder and hisses at anyone who comes within five feet of me. He coos and rubs up against my neck. When I come home from work, he dances and sings me the Colonel Bogey March and the Battle Hymn of the Republic. 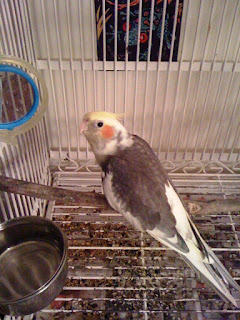 And now Mr. Bean has put Kevin on the family stickers on the back of the car, which means he is a permanent part of the family. Which wouldn't be so bad, if the family stickers didn't already feature 4 cats and 3 dogs. But can I get rid of him? No; I can't. Because he's just sofa king cute.

Yes; you read that right: Chicken. Coop. Which means, of course, that we will soon have chickens. 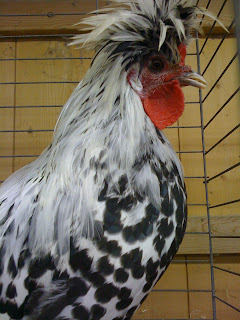 This is something I have resisted for years; I hate chickens. Hate them. Mr.? He loves them. For as long as I've known him, he's wanted chickens. Kes wanted chickens, too. I think she may have had a hand in this.

Mr is thrilled beyond words. This is important to him.

So maybe having chickens won't be such a big deal. The little ones are actually kinda cute.

I wonder if any of them are interested in having a very handsome pied cockatiel for a boy friend? This has possibilities.
Posted by Beanie at 10:48 PM 2 comments: Links to this post