I watched my mother go through it, as she struggled over my homework papers in fifth grade, with numbers stacked neatly over an upside-down division symbol. I thought she was quaint, and perhaps a little crazy, as she cursed under her breathe over "that cockamamie stuff they are teaching you kids".

Now, bent over Daisy's pre-algebra homework, I'm encountering it for myself.

I see now that this is not so -- every generation has their own New Math. Like popular music and slang, the objective of the New Math is to isolate the previous generation, to distinguish them as out of touch and out of step with contemporary culture and learning.

Last night, the object of the exercise was "isolate the variable". 1/5t = 9. I carefully and dutifully explained about the use of the inverse of the modifier -- in this case, 5 -- on both sides of the equation. Daisy watched, frowned, and then howled, in frustration.

She demonstrated, using a combination of fractions above and below the line, with several arcs, leading around the equation and rendering the entire thing unreadable. She also got the wrong answer.

"Look, this isn't a bloomin' art project, it's an equation. Multiply both sides by the inverse of the modifier. See? Then you reduce the modifier in front of the variable to 1 and get the right answer."

She frowned again. "That's not how we're supposed to do it."

"OK, well YOUR way is giving you the wrong answer."

She drew a frown-y face next to my equation. She then announced that she would stop in to see her teacher in the morning about it, and stalked off to her room.

This morning, darling hubby talked with her math teacher, explaining the encounter from last night.

He looked at her, puzzled. "Then how on Earth do you isolate variables??"

It appears we're doomed to that realm of quaint insanity, where my parents, and their parents before them, have dwelt since time immemorial. I'll bring my Supertramp albums to pass the time.
Posted by Beanie at 9:29 AM 6 comments: Links to this post

Saying NO to big Agribusiness 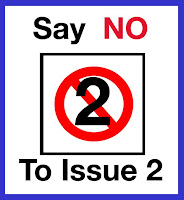 So, every now and again, my unexpected political side comes out. I think I’m just getting feistier as I get older; either that or the boots to the head just don’t hurt as bad. This is one of those times. If you don’t live in , you can pretty much ignore this

– or not. It’s likely to pop up in a state ballot near you, soon…

Issue 2 is on the ballot here, in the land that’s round on the ends and hi in the middle, and it goes something like this:

If you keep food animals, regardless of the size of your farm, the regulations for keeping those animals will be decided upon by a 13-member Ohio Livestock Care Standards Board, made up primarily of “farmers” (emphasis mine), with minority representation from veterinarians, animal welfare advocates, and consumers. This Board will make the recommendations to the State Department of Agriculture and will take the place of the state legislature and state referendum process, with regard to animal care.

Sounds pretty innocuous – even animal-friendly – on the surface, doesn’t it? We let the farmers -- who depend on our food animals for their livelihood – decide how best to care for their animals, and we keep the potential charismatic wingnuts and the special interest groups out of the mix. I have to admit, on first read, I sort of liked the idea myself.

Until I read the language more carefully.

The advocates for this Board are asking to amend the State Constitution to create it. There are only two Boards dictated by our constitution at present: the Board of Education and the Board of Worker’s Compensation. What this means is, in the event that this Board isn’t actually looking after the best interests of the animals that make up our food supply – and by extension the people who eat food in this state – we can’t revise or abolish it without changing the state constitution.

Whoa. That’s a lotta faith to put in a new idea, and I think it poses a serious threat, not only to the care of our food animals, but to the process by which we keep an eye on industrial agriculture in this state.

If “Industrial Agriculture” sounds like “Beanie’s just being a knee-jerk liberal again”, it isn’t. In a recent radio station interview, Jack Fisher, the EVP of the Ohio Farm Bureau Federation, insisted that this issue was intended to help “family farms”. Well, lookee there. It's Mom and Apple Pie. When questioned about how big a “family farm” is, however, his answer was, “Well, some families are pretty big, you know?” While Issue 2 talks about “family farms”, the definition of “family” is pretty darned broad. If a Confined Animal Feedlot Operation (CAFO) is privately owned, it’s considered a family farm. Even if it has 500 employees and a million animals. 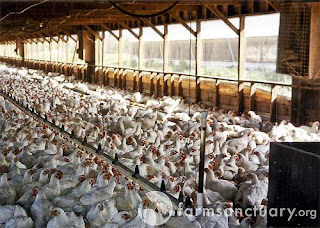 Does this look like a “family farm” to you? Is it something you’d like to have a say about, before it moves into your back yard? Or would you at least like to have some say about the population density, waste disposal or noise regulations associated with it? If we pass Issue 2, you won’t have that say. And neither will your congress people.

This isn’t a rant against eating meat. We’re omnivores. We eat meat. And it isn’t necessarily an endorsement of the Humane Society, which can have its own agenda sometimes. But it IS an indictment of those who would hold the citizens of this state hostage to the interests of large agri-business firms, with only the most onerous of recourse if we find ourselves unhappy with any potentially self-interested behavior on their part. There’s a better way to do this. Every major newspaper in the state is opposing this Issue. I plan to, as well.

Vote NO on Issue 2.
Posted by Beanie at 1:34 PM No comments: Links to this post