One of my favorite new blog reads is The Momma Rocks, a continuing saga of motherhood written by a local rebbetzin. She's just a couple miles from me at work, and I swear I'm going to take her to lunch one of these days.

She is one of the most "hands-off-make-your-kids-accountable" parents I know and I admire her approach. Today's rant is about getting local school teachers and administrators to understand that her kids need to suffer natural consequences at school for not having their act together.

And I am envious of her success with her approach to parenting, mostly because I'm not sure I will ever be able to take it. I have struggled for awhile with The Bug, who has had some behavioral and neurological difficulties from birth that make it devilishly hard for her to self-organize. She has made great strides, to be certain, but I'm probably a lot more hands on with her than I want to be -- or would be otherwise.

And now, we have an additional struggle with Daisy Mae. Without going into detail, she's arrived in the house, at the age of 14, without ever really having been taught accountability. This is a bit counter-intuitive, given how much she had to -- literally -- survive on her own for awhile. But as under-parented children often do, she has become a pro at deflecting blame and responsibility. She does not think her actions through and then she steadfastly refuses to see her role in any failure. As you might expect, this set of habits and behaviors has run head-long against her desire to be more independent (which I heartily support).

So I'm left with this dilemma: How much do we manage her, and help her manage herself? She is desperate for us to have a "hand-off" approach to her right now, but she truly lacks the skills to keep herself organized and on-track. I am tempted to let her fall on her nose a couple of times so we can use those times as teachable moments, and yet, the ramifications of allowing her to suffer the natural consequences of her deficits in this regard can be catastrophic for her at this point. I need to figure out how far we can let her fall before we catch her, and still ensure that she learns real lessons and real natural consequences.

I need to spend some time consulting with some of my friends who teach high school. They're stuck in the same position I am -- they have to take students and prepare them to go out into the world, without the benefit of having been involved in their early training.

But I'll toss it out there to some of you. Those of you who've parented or taught "special needs" teens: how do you go back and teach some of these kids (the ones who are missing fundamentals) accountability and self-reliance without letting them fall on their faces TOO hard? 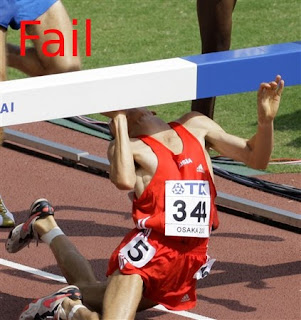 Image courtesy of the Fail Blog
Posted by Beanie at 10:33 AM

Praises to you for bringing Daisy into your life. I am envious in some ways.

I haven't reached this point of parenting yet. I wish I could be of more help. I stick to one rule in my house religiously and that is show RESPECT. I remind Austin his actions (or even my actions) don't just affect him, they affect everyone around him. Even though we are entitled to fail once in a while, its not the way to live your life. You will miss out on a lot if you continue to live outside the responsibility of your "choices" for whatever reason you choose in the moment.

Another great line, Organize or Agonize. Baby steps... Baby steps... Just like your friend wrote of today. It starts with socks! Good Luck. I have complete faith in your inherent intelligence and abilities.

Missed this post of yours. So my thoughts as often i question what i am doing right and/or wrong. Peter and I go round and round..he is trying so hard to be on his own and then I want it done my way. Bad mom example, however I am a firm believer in puberty and the hormone issue. I am often reminded that they lack the front lobal brain development and they just are not able yet to make those decisions that we make every day with a blink of an eye. I relate it to my menopause. some days my brain just doesnt function right and lack of thyroid doesnt help. I have a great book and will email you the author..Make it a great day B...hugs from Idaho

All right, I had a whole long response sprinkled liberally with "eduspeak," and then I decided to actually read the Rebbetzin's post and the one before it and your response.

You have to give her the tools to start out with. She's going someplace she's never been before. She'll need more than the key to the car. She'll need the address of her final destination (clear expectations) and a map (organizational tools). She can travel by herself, but don't be surprised if she has to call home every now and then, lost and looking for directions.

Thanks to all of you. I'm being pretty darned hands-on right now. She's hating it, but I told her that I'm more than willing to put up with her calling me a b*tch under her breath, if it means that she succeeds in school.