Where is Bill Cosby when we need him?

(from Bill Cosby is a Very Funny Guy...Right)

I respect the rights of all Americans to believe whatever cockamamie thing they want to believe.  Seriously.  I may decry Young Earth Creationists and their willful blindness to scientific evidence, but I won't insist they believe differently, so long as they don't push their views on me or anyone else.  I also respect the rights of complete atheists, who believe that all that happens here is completely controlled by us and that when we escape this mortal coil, we become nothing but food for worms.  They don't share my belief in the immortal soul, and that's cool, so long as they don't insist I dispel my own belief in some plane of existence that transcends this place.

It's all good, that is, until religion starts to influence public policy, especially on things like education and energy, which affect all of us now and well into the future.

Mr. Shimkus is a Republican (seriously; was there any doubt?) from Illinois who insists that Global Climate Change is a myth and will not cause us any long-term harm, because God promised Noah he was done messing with us after the Great Flood.  As a result, he claims, we should continue to carry on as we please and not pay attention to whether our actions have any effect on the environment.

Seriously. I can't make this stuff up.

And no; that link will not be taking you to The Onion.  The dude is serious.

So like I said, he has the right to believe what he wants.  But here's where I am getting a little nervous:  Congressman Shimkus wants to lead the House Committee on Energy and Commerce!  To which I say, "Holy Carbon Footprint, Batman!"  I mean, even if he's right:  even if God is going to save the planet from burning up into a French's Fried Onion, doesn't it make sense to try to take care of the place between now and the Deus Ex Machina rescue scene?  And criminy; what if he's wrong?  What if the authors of Genesis, through the generations of oral tradition that preceded the actual commitment to papyrus of the Enlightened Word of God, might have left off a key clause, like, 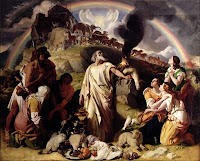 "...Never again will I curse the ground because of man, even though all inclinations of his heart are evil from childhood and never again will I destroy all living creatures as I have done, unless you really really screw up again, and then I'm kicking you all to the curb."

I'm reading that covenant over and over again, people, and I don't see anything that stipulates that God is obligated to save our sorry butts from our own stupidity.    I think He just promised He wouldn't flood us again.  Am I missing something here?

The bottom line is this:  Do we really want our lawmakers designing energy policy based on a 5000-year-old myth?  Whose myth do we believe?

Are you willing to take that chance?
Posted by Beanie at 12:09 PM

You know, I get that most other people believe in a divine being that truly loves them and has their best interests at heart. I don't get it when a few of them take it this far, this literally - and insist on making it public policy for the rest of us.