If you can spare a hope and prayer tonight...

My intention this week was to write an account of my week off last week. I won't say "vacation" per se, as we didn't really go anywhere. But it was great to not be working. I took the girls down to the Columbus Zoo, which is really a remarkable place. Their lorikeet exhibit isn't appreciably different from the one in Cleveland, but as you can see, the lorikeets are a good deal more aggressive there. 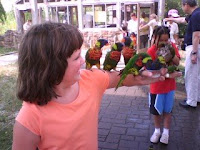 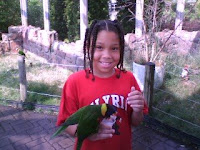 It was a lot of fun.

Seriously. I was going to wax poetic about the joy of sleeping 8 hours a night and going to the pool, just because. Alas, that's not in the cards for tonight. Mopey McMoperson's Blog of Doom appears to be alive and well.


Tomorrow, my father-in-law will be having heart surgery to correct several issues. It's not a tremendously high-risk procedure, but it's heart surgery and it has us all worried.

Then, this morning, my mother-in-law called. Her mother, my husband's grandmother, moved in with them a couple months ago, as her health was failing. She improved dramatically for the first month or so. But in the last two weeks, she's been fussy: moody, inclined not to eat, a bit verbally abusive toward my mother-in-law. We've been a bit worried about dementia.

It wasn't her mind. It was her heart. When the doctor tested it this morning, it was pumping at less than 15% of what is should be. Her liver was shutting down. Her kidneys were failing. Her digestive system is not functioning. The doctor sent her directly to hospice.


My heart is breaking for my mother-in-law. This woman has been giving and giving of herself for the last several years; taking care of my father-in-law, taking care of her mother, helping out with K when we need it. She doesn't complain. She doesn't nag. And now she's facing losing her mother before the week is out, at the same time as she is facing carrying her husband through a tough rehab, while hoping and praying that he makes it to that point.


I know that I should be praying for the health of my father-in-law and S's grandmother. But my thoughts and prayers aren't going to make a difference for them. Grandma is going to pass. She's finally going to join her husband. And my father-in-law is going to come through this based on his own physical strength and fortitude.


My heart is focused on their caregiver. I want to wrap her in my arms and help hold her up. I don't know if she'll let me do that. But I can pray for her strength. And I can reassure her that she's doing a great job. Because she is.


If you have a good thought to spare, think about my mother-in-law, Irene, and send her a bit of strength. She could use it.
Posted by Beanie at 9:58 PM

For everyone involved, yourself not least. *hug*