We are hosting Thanksgiving dinner this week.

We have been hosting Thanksgiving for the last 12 years; when Kes was born, we used it as an excuse to stop running all over hell's half-acre on holidays.  We typically get anywhere from six to eighteen guests.  We've done this meal so many times, I think we could prepare it with eyes closed.  Actually S does most of the shopping and preparation while I am at work.  So I never really gave much thought to the ingredients.  We typically buy a fresh turkey, so the actual bird won't be in the fridge until tomorrow night.

This morning, however, as I went to get milk for my coffee, I actually stopped to look at what was in my refrigerator.  I made an important discovery.

It would appear that at my house, Thanksgiving is a celebration of milk fat. 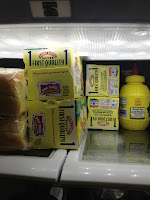 Yeah.  That's four pounds of butter. For starters.  Everything takes butter:  The turkey, the stuffing, the mashed potatoes, the bread, the yams, maybe a bit more in the mashed potatoes...you get the picture.  If they eat it, my husband puts butter in it.


Next, we move down one notch on the Fat Continuum: 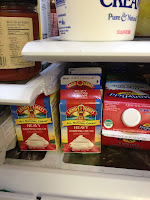 Apparently, we need not only heavy cream but also whole milk.  I haven't had a glass of whole milk in perhaps 35 years, let alone have I ever found a use for 2 full quarts of heavy cream.  But Daisy Mae wants to make Pineapple Delight, and S wants to make homemade eggnog, and we need a bit for the Macque Chou -- because nothing says traditional Thanksgiving dinner like a nice Cajun Tasso ham and corn creation. 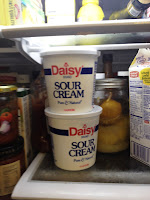 You may have noticed the Sour Cream in the last picture.  Two pints of it.  I have no idea what it's for.   S said bean dip.  Last I checked, we didn't have bean dip on the menu.  But you never know. 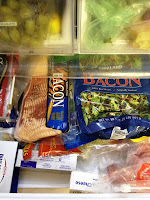 Not sure about beans, but we certainly have a lot of bacon!  Again, no foreseeable use for bacon in the menu, but I suppose it's always best to plan ahead just in case there is a global bacon crisis. 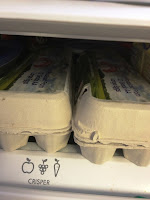 About now I'm actually concerned that there are no actual vegetables or bread products in the house.  I consult the veggie drawer: 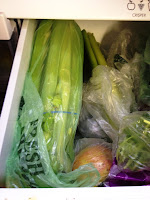 We reveal a rather forlorn package of celery, one apple, some green onions and a healthy wad of parsley.  At least we will have fresh breath.


But as I look up, apparently, we had a concern that two quarts of heavy cream would be insufficient.  Because I see this: 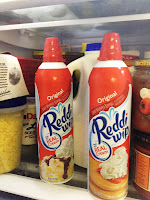 No pumpkin pie will go undressed in our house!!

I did a quick calculation on fat grams.  In total, we're looking at 2,497 grams of milk fat.  Or a little over 5 pounds of fat.  Divided by 24 expected guests, that is...well, it's a lot.  Plus the eggnog. And the gravy, the skin on the turkey, and Joyce's pumpkin pie.

I'll plan for us all to do some jumping jacks after diner, I guess!

I hope each of you has a peaceful, joyous and most blessed Thanksgiving.

Pass the whipped cream, will you?

Ah, Happy Fatsgiving. We're cooking duck confit, potatoes in duck fat, and we'll be eating at least one kind of soft, creamy cheese. There will be vegetables, but I imagine they'll be cooked in duck fat as well. Or drenched in butter. Either one will do.

Throw some of that sour cream in the mashed potatoes. Oh, so good.