You Can't Run Away on Bath Day.

Any of you who have ever been to my house know that I have the biggest, hairiest dog in the universe.  His name is Max.  He’s a Scottish Deerhound.  He stands 34” high at the shoulder.  He can reach all but the middle five inches of my kitchen counters without any of his four legs leaving the ground.  Despite his advanced age (he’s 90 years old, in dog years), he can still rear up on his hind legs and take things off the top of my fridge.  I have witnessed this.  He’s huge. 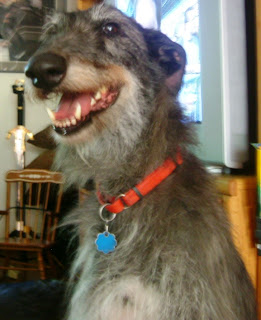 In addition to being physically tall, Max is heavy.  And covered, head to toe, in a double coat of five-inch long wiry hair.  Imagine having to conduct all of your daily requirements while wearing a Sasquatch suit; now you know what Max goes through.  I love him.  But he can get pretty fragrant sometimes. Oh, and he’s arguably the most neurotic dog in the universe.

In the summer time, we can put him in cross-ties and use a bucket of soapy water and the garden hose to get him clean.  Once the weather gets cold, this is no longer an option.  None of the local groomers have dog wash stations that can safely accommodate a canine the size of Mike Tyson with the temperament of Woody Allen.  He’s too heavy to lift in and out of the bathtub and besides, it’s too slippery in there for him.

That leaves us with the shower stall in the laundry room/mud room.  Which is large enough for him to stand in, if he doesn’t move too much.  With the door closed, there’s scarcely enough room for me to get in there with him, and in order not to make a bigger mess of things than necessary, I am forced to join the dog au naturel for bath time.

This was how we began last Wednesday Bath Time Adventure.  The soaping up and scrubbing part went well enough; he stood patiently while I wetted all his fur, lathered and scrubbed all his various dignified and undignified doggy parts.  It was when we got to rinsing and brushing that things began to come apart.  Deerhound fur is a curious substance.  It clings to deerhound skin in a very tenuous manner, dislodging itself under with even the scarcest effort.  As I began to brush out Max’s fur, large clumps of it came off of Max, attaching itself to the shower tile walls, the floor…and to me.  Within minutes, I was disturbingly festooned with large expanses of thick, dark fur clods, until I began to wonder if this was what felt like to be Sean Connery’s back.

I encountered a few mats that needed cutting out, and realized I had forgotten the scissors on the kitchen table.  I released Max’s head and he reacted as any self-respecting dog would:   He shook from head to tail, releasing a shower of extra fur that covered all my remaining exposed skin in a deerhound patina.  By now, I was well and thoroughly short of patience.  “It’s a good thing I love you, you hairy, stinky beast.”

My husband and daughter were out running some errands, so I was alone in the house and couldn’t yell for the scissors.  I looked at Max.  “I’m going to get the scissors.  Be a good boy.  Don't.  Move.”  Shutting the shower door, I emerged out into the kitchen:  nude, sopping wet, covered in hunks of dog fur, half of my hair sticking straight up from where Max had rubbed shampoo into it, and wearing a murderous expression.  I can only imagine I resembled Helena Bonham Carter half-morphed between Belatrix Lestrange from Harry Potter and Ari from Planet of the Apes.

It was then that I discovered my family had arrived home some time while I was washing the dog.

My daughter let out a horrified scream.  “Jeeezus, Mom!”  She fled the room.

My husband unsuccessfully hid his desire to burst out laughing.  “Um…snicker…well…snerk…So…how’s the bath going?”  He covered his mouth and snorted; his eyes started to water.  “You, um, wear the hot-n-hairy look well.”  He was now laughing openly.

From the other room I could hear my daughter yelling, “Gawd!  I’m going to need brain bleach now!”

My voice came out as a strangled growl.  “Just give me the f*cking scissors.”

By now, Max had dislodged the shower door from its track and was sliding around the laundry room floor, where he upended the cat box and coated his recently-clean legs in used cat litter.

I returned to the shower, re-washed and re-brushed Max's legs, finished drying and grooming his fur and released him, now joyous and bouncing, back into the house.  I got myself cleaned up and collected all of the dog fur.  I intend to card and spin it; by winter’s end I should have knitted two schnauzers and a wire-haired dachshund.  My husband and daughter can wash them.

I hope there’s no more mud until summer.
Posted by Beanie at 6:06 PM

I believe I snotted upon my laptop screen while laughing along with Husband. And oh, poor Daisy Mae - but at least she knows if the carpet matches the drapes.

What, no pictures? :D
Great story, Beanie! Thanks for the laughs!

You are a raconteur!

This took me a long time to read, as I was laughing so hard I was crying, and kept mopping away tears, only to read two sentences and start all over. You're a gem, Beth, a priceless gem.

You have brought tears to my eyes ... in a good way.


*nailishis* The sound of sneezing brought on by an overabundance of deerhound fuzz.