Tap, tap, tap…is this thing on?
So it’s been awhile since I’ve been here.  And there’s a reason for that.  Because most of the major happenings in my life over the last several months have had to do with work, and as we know, blogging about things that happen at work is an almost sure ticket to blogging as a full-time job.  So I’ve elected instead to not blog.  But we’re now in week 22 of Stuff We Can’t Talk About On The Internet, and I’m tired of not blogging anymore, so I’m going to try something a little different.
We’re going to indulge in a Food Post.
Really, all of this is my girlfriend Christy’s fault.  Last week, she posted a blog entry on my Facebook page about a woman who was making flour tortillas.  Christy thought this woman was all perky and funny and said, “I want you to blog about cooking.  You haven’t blogged about cooking since your potato salad recipe.  By the way, a very charismatic gay friend of mine made ten pounds of your potato salad for Independence Day this year because of your blog.  Ten Pounds.  That’s power, I tell you.  So tell me a story about cooking.”
So here’s the problem:  I really am not fond of flour tortillas.  They are cellophane-wrapped bits of dubious foodstuff that invariably become gummy and unappetizing in one’s mouth and every time I eat them, a little blob of white goo gets stuck in a crevice between my right incisor and the adjoining tooth.  That, plus, Christy is one of the many members of my circle of friends who has recently discovered (or decided) they are gluten intolerant.  I call them my Gluten Heads.  And flour=gluten.
Corn tortillas, on the other hand, are delightful bits of food-wrapping goodness.  Delicate in consistency, slightly sweet, small enough to cause one not to super-size the fillings, they are to flatbread what truffles are to mushrooms.
So I set out to find a good corn tortilla recipe.  I thought this might be a challenge.  Given that one rarely finds corn tortillas in the grocery store, and that even Mexican restaurants often do not feature them, I have lived under the impression that preparation of a good corn tortilla was complicated, and therefore restricted to the expertise of the Mexican Grandma-types who can be found in the windows of Old-Town San Diego eateries.  I have often equated the preparation of corn tortillas to be akin to Cuban Cigars that are “Rolled on the Thighs of Island Women”, as the stalls in Key West would have you believe.
Lo and Behold, the morning after I embark on this journey to find The Perfect Corn Tortilla Recipe, this month’s Fine Cooking arrives on my doorstep.  The feature this month involved Corn Tortillas, and the festooning thereof.  Quelle chance!  I eagerly ripped into the magazine, focusing on the recipe as though I had uncovered the secret to the perfect Krabby Pattie.  I zeroed in on the ingredient list to learn that the ingredients were:
Masa Harina (that’s corn flour, to the rest of us)
Water
Salt.
Now if you’re like me, you will stop at this point and look at the back of your computer to see if there are some words that may inadvertently have slipped off the screen and slid behind your desk.  I assure you, they have not.
Being trained in the sciences, I have been forced over the years to take a statistics class or two.  Because of this, I am able to make the following calculation.  Corn has an 87.94% chance of encountering both water and salt without any human intervention whatsoever.  With this in mind, let’s revisit the ingredient list:
1)      Corn
2)      Stuff that exists in Corn’s natural habitat
In other words, Corn.  That’s it.  Just…corn.  Seriously?  How could I pass this up?
Challenge #1 is finding good quality Masa Harina.  I live in the epicenter of rural whiteness in north-central Ohio.  So I drove toward Lorain, which has the largest Puerto Rican population outside of Puerto Rico.  They also have some of the most bitchin’ foodstuffs in the universe.  The go-to brand for Masa Harina is Maseca
I set the iPod to play a little Rodrigo y Gabriella, and headed for the kitchen.  Following the recipe on the bag (the Fine Cooking recipe called for, like, eight pounds of masa and a truckload of water.  I wanted to make about a dozen tortillas), mix 2 cups of masa with a half teaspoon of salt and 1 ¼  cups of warm water.  Use your hand to knead it together for a minute or two.  You want to make sure it holds together but not let it get too wet. 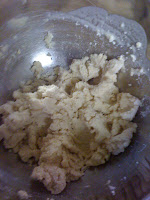 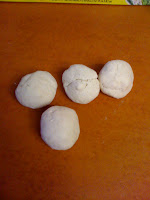 Here’s a good test of the water content:  Roll about two tablespoons of the mixture into a ball (it’ll be about 1 ½ inches in diameter).  Now flatten it slightly.  If it forms deep crevices in around the edges, it’s too dry.  If it feels wet to the touch, it’s too wet.  Think Play-Doh.
This batch should make about 16 dough balls.  Cover the dough balls with a damp towel until you’re ready for them
Now, the masa bag and the magazine both recommend using a tortilla press for this next part.  I have a very well-appointed kitchen but do not have a tortilla press.  I do, however, have a really big heavy cast iron skillet.
Place a dough ball between two pieces of plastic wrap and flatten with your tortilla press.  Or if you’re me, whap it really hard with the skillet.  I sent cats flying to the four corners of the globe with this one! 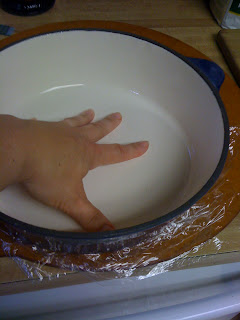 Alas, the result was a bit too small and too thick for my taste, so I fell back to my trusty old rolling pin for the finish.  The results were somewhat less than perfectly round, but still quite serviceable. 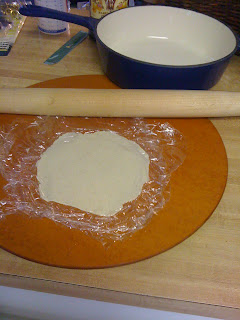 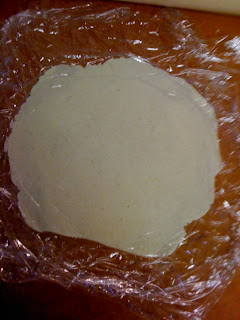 I used my pancake griddle for the cooking.  You can also use a good heavy frying pan.  No need to grease; they don’t stick.  I set mine for about 325-350.  That’s solidly medium-high for those of you on the stovetop.
Remove the plastic wrap and slap the tortilla down on the cooking surface.  The slapping thing ensures that no bubbles form under the tortilla.  I cooked mine for about a minute to a minute-and-a-half per side.  It’s done when it starts to dry out a little and maybe gets a bit brown. 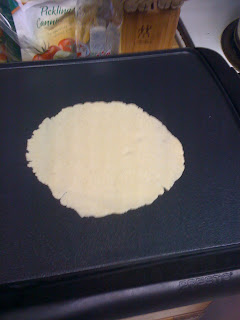 That’s it.  Cover them up with a damp towel until you are done with the rest of the tortillas, or until you develop tendonitis in your wrist from wielding that big heavy frying pan and all that tortilla-slapping.
Daisy Mae proclaimed them too sweet and grabbed one of the flour bombs out of the fridge.  What do kids know anyway?  I thought they were delicious, and they seemed to have the right balance of flexibility and strength.  I’ll make them again. Especially now that I know how stupid easy they are.

Corn.  Who knew?
Whew!  That was, like, three entries in one, now wasn’t it?
Next time, we’ll explore white shrimp pizza with sun dried tomatoes and artichoke hearts.
Posted by Beanie at 11:37 PM

I must make these. AFAIK, I'm not gluten intolerant, though a heaping plate of pasta can bind me up for days, with pain. Having said that -

On a freshly tossed or rolled and generally olive-oiled crust, place a boat load of bocconcini (fresh mozzarella balls) and decorate with basil chiffonade and sliced prosciutto. Bake until crisp and fend off any interlopers with a flame thrower.


ureanoa: where fertilizer is made in NZ

How awesome is that! You make it seem so much less intimidating than I'd imagined it would be.

Smaller/thicker = sope... I don't really care for it either but there you go. Any of these cooked in oil is great too, and most taco stands will reheat the tortilla by briefly slapping it onto an oiled griddle.

Glad you are back!

This is generally a wonderful website i should say,I enjoyed reading your articles. This is truly a great read for me. I have bookmarked it and I am looking forward to reading new articles. Keep up the good work