My friends, Cathy and Mike, performed a remarkable and beautiful favor on behalf of another friend, Patty, last night. That sounded convoluted, didn't it? Well, read about it here; it'll make more sense.

So I haven't mentioned this too much before, but Bug loved the ocean. When she had just turned three, we took her to Florida for the first time, and immediately headed to the north point of Captiva Island on the Gulf coast. I love that point -- it's a haven for Dolphins, Herons, Egrets, sport fishes of all kinds. The beaches are covered in shells, the waters are sparkly, and the sand is fine and soft. Bug took one look at the place and fell deeply in love with the great expanse of water that lay before her.

At three, she didn't have the skill for ocean swimming, so I held her hand tightly while she was in the water. She hated that. She longed to venture out. I longed to keep her from being carried out to sea. But she loved it. There are a lot of stories from that week. Stories that include her getting cold in the water with resultant pooping on the beach and hungry seaguls and Mommy deciding that she could no longer show her face in public and having to find a new beach after that. Stories of our needing to stop at every alcove and inlet, so she could get out of the car, feel how the water was "different" on her feet in each place, and dip her bottom in the water. Stories of first encounters with manatees, including more impromptu swimming forays. But we can tell more of those stories another time. They made her life richer, and ours, too.

Bug insisted I teach her to swim, immediately upon our arrival at a pool, and at every opportunity thereafter, so she would never again have to spend her beach time tethered to her mother.

By the time she was seven, she was "Beach Girl". Here she is, saving sand fleas in a bucket. 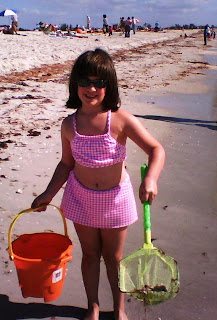 Have you ever seen sand fleas? Also called "Mole Crabs", they're tiny crustaceans that live on the beach, just at the breakline. They like the extra oxygen that is generated by the churning of the water as the waves break. When you pick them up, in a handful of shells, they try to burrow into the sand and they tickle your hands. This was Bug's definition of "The Best Animal God Ever Created".
Cute little suckers, aren't they? 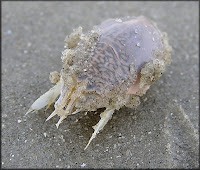 No? I don't think so either.
But Bug loved them, which doesn't surprise me. Because she was always finding wonder and beauty in the things the rest of us found odd or even ugly. And because she was, is and always shall be a sea-loving creature.
So the favor? Cathy and Mike took a rose from Bug's funeral, lovingly saved for the last six months by Patty, and cast it into the ocean when they reached the shore yesterday. It was a beautiful gesture of love and remembrance. I'm sure her spirit was there to catch it. And I'm sure she smelled it, then smiled and laid it on the beach next to her bucket, just before she grabbed her dip net to head back into the water.
Posted by Beanie at 8:59 AM

That was the sweetest thing.

Wow, that just might be the rose that I left in Patty's car on the way back to their house. I was leaving the wake, and found it on the ground, and it felt like a present from Bug...I realized on the drive back to Dayton that I'd forgotten to retrieve it out of the car when I left - but now I see that it was meant (if it is indeed the same rose) to go to the ocean! How beautiful.

Alexandra, just in case Patty doesn't see this and chime in: She found the rose in the back of Kurt's car; she didn't know where it came from. So I'm assuming it is the same rose.

beautiful and so heart warming.