I was invited to that most dangerous of all social events this weekend: The Ladies’ Tea.

This particular tea was presented by a neighbor of mine, who has a son the same age as my daughter and whose company I appreciate greatly. I won’t say necessarily that I always enjoy it. She is well-intentioned, but completely overbearing, and she browbeats her husband to the point that I have started teasing her about it just so I don’t scream. (On a related note, my husband keeps a tiara in one of our coffee table drawers at home and when she starts ordering her husband around in our house, he whips it out and places it on her head. I love that man) 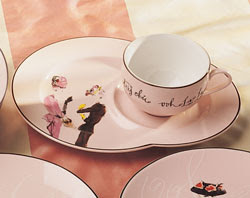 The table was lovely; finger sandwiches, tiny muffins, phyllo horns with coconut pudding and strawberries. I contributed my tarragon chicken salad and sugared grapes to garnish the other plates. The other women in attendance, six in all, were also lovely. I’d met three of them before; we all have kids roughly the same age and so we have that in common.

I came to realize during the conversation, however, that every one of these mothers was stay-at-home. And they all voiced a common complaint: “My husband gets to spend all day long with interesting people and take a 2-hour hot lunch if he wants to, and then he lolly-gags home at night. Like he doesn’t understand how tough my day has been chasing around a pre-schooler all day.”

I paused. 2-hour lunches? Lolly-gagging? I spoke aloud “Where do these guys work?? Because…dang. I’d love to have a 2-hour lunch! And I don’t know what they do for a living, but when I don’t get home until 7:00, it’s because I had work to do that kept me there. It’s not like you don’t want to come home.”

There it was. My second head. Poof! Just like that, it must have grown out of my left shoulder because there were five sets of eyes, staring at it.

One of the younger women, who bore a striking resemblance to Barbie (honestly; it frightened me) spoke up. “How does that work? Do you have a nanny?”

“No; I mean, who takes care of your daughter?”

“That would be guy who represents the other half of her parents. He finishes classes around 3 pm and picks her up from school. They hang out and do homework until I get home.”

She looked skeptical. “And that works out?”

I paused at this question. “They’re both still alive, so far, so I’d have to say Yes.”

En masse, they averted their eyes from my second head. We spoke no further about it and at some point it must have retreated back into my left shoulder. I’m thinking it was right about the time I mentioned that the football cake pan I bought in 1991 had thus far served quite adequately as both a fish and an armadillo for various parties.

But it left me feeling, not for the first time lately, like I was dreadfully out of place in this world.
Posted by Beanie at 9:46 AM

Shame on you for not enabling their kvetch!

And yes, dear. You are unique. Flaunt that, babycakes!

Seriously. you are worried about "barbies" opinion of you? Your second head sounds like the hit of the party to me! d*mn inconvenient when your child's friends have mothers with no real purpose, isn't it?

pass me a piece of the armadillo cake, and give me a shot of whiskey. Lets teach those blow up dolls a thing or two about reality.

It sounds like you are living in the real world, and they are the ones who aren't.

The whole things sounds so prim and proper and upper middle class - it makes me want to shake Barbie and tell her to wake up and enter the real world - and be thankful she doesn't have to have a job and can spend the time at a Ladies Tea instead of helping to support her family and pay the bills.

boy do i know how that feels! out of place in this world...